How a Recession Could Impact the Housing Market

The middle of summer is generally a quiet time for real estate in our area, as many buyers and sellers go on vacation, and this summer has been no exception.  In San Mateo & Santa Clara counties, median sale prices in all categories experienced a decrease on both a year-over-year and month-over-month basis.  Condos & townhomes in Santa Clara county saw the biggest change at a 9.6% decrease from June to July and an 11% drop compared to last July.  The number of new listings decreased for all categories in both counties, except for condos & townhomes, which stayed relatively the same.  Inventory levels remained low at about 1-2 months in all cases, although generally higher for Santa Clara County compared to San Mateo County.

New listings and market activity in general usually increase in September, so we’ll continue to keep you posted as the year progresses.  If you would like more detailed information about the market in your specific neighborhood, please feel free to reach out to me any time! 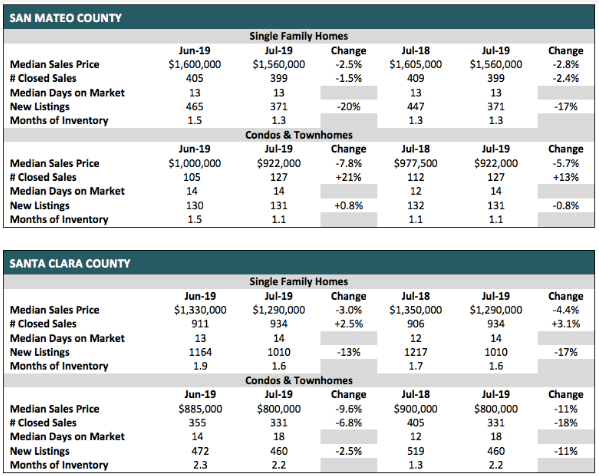 How a Recession Could Impact the Housing Market

It seems that the prospect of recession is looming ever nearer.  Economists, investors, and market observers have started to sound a little extra gloomy when it comes to their economic predictions in recent days. Bank of America and Goldman Sachs have warned of a rising risk of recession, and the infamous “yield curve” is signaling things might soon get dark. The Dow Jones Industrial Average fell by 800 points on Wednesday, marking its worst day of 2019.  What might this mean for the housing market?

It’s somewhat counter-intuitive, but recessions don’t necessarily mean bad things for the housing market. In fact, they usually don’t.  ATTOM Data Solutions, a leading real estate data provider, looked at home prices during the five recessions since 1980 and found that only twice—in 1990 and 2008—did home prices come down during the recession, and in 1990 it was by less than a percent. During the other three, prices actually went up.

For a recession to impact the housing market, it would need to fundamentally alter the dynamic between supply and demand. A spike in unemployment could negatively impact demand, particularly if an intensifying trade war leads to export tariffs, which could put jobs at risk. But with unemployment already unusually low, it would take a pretty dramatic rise to cause home prices to drop.

It’s even harder to see the supply shortages being alleviated by a recession in a way that impacted prices. If a trade war leads to tariffs on imported construction materials, the cost of new home construction could rise even higher than it already is. Tight immigration policy could make construction labor more scarce as well.  “It really depends on ... the magnitude of [foreign] tariffs, and then how aggressive the federal government is at placing tariffs on imports that go into the housing market,” said Ralph McLaughlin, an economist with CoreLogic.

If a recession hits, the Federal Reserve is almost certain to lower rates in order to jump-start the economy. The Fed has also signaled that in the short term it intends to keep rates where they are, and President Trump has made no secret of his opposition to the rate hikes.

Primarily, the shoddy mortgage lending practices that flooded the market in 2004 are not present today.  In the years before 2008, mortgage lenders made loans to unqualified buyers, or subprime buyers, without verified income or down payments and pushed those buyers into risky loan products that were destined to fail. When the subprime loans started defaulting on a wide scale, the securities failed, too, leading to a financial collapse on a scale never seen before. Mortgage lending practices today are air-tight, and as a result, subprime mortgage bond issuance is a tiny fraction of it was prior to the crisis.

Another factor in the 2008 collapse that hasn’t been talked about as much is the oversupply of housing. In the early 2000s, regional home builders consolidated to form large national companies, and started churning out houses in volumes that dwarf the pace of building today.  Real estate speculators often purchased this oversupply, and when the crisis hit, they just let those houses go into default because they hadn’t put any money down on it anyway. This led to massive housing supply for sale during the collapse, which pushed prices into free fall. But today, housing supply today is incredibly tight.

While the specific mechanics of the 2008 collapse won’t play out if there’s another recession, economists have speculated whether the psychological scars of the crisis would lead to unwarranted panic in the housing market if the economy starts turning sour.  “The psychological component I think is absolutely dark horse in what might happen in the next downturn,” McLaughlin said. “The more that we can provide data out there to help such households make more rational decisions in the housing market the better."

In conclusion, there’s no need to react in fear or anxiety about the future.  More than ever, it’s important to stay informed about the market and then evaluate that in light of your specific goals and situation.